The world is broken and needs to be fixed. And so, we gather to celebrate the message of life, hope and joy found only in Jesus.  Whether you are a skeptic, a curious inquirer, or a believer in Jesus, you will find us a place to ask honest questions, hear the truth, and build relationships. It is a place where you can worship, learn, and find community.  Tracing its history back to the 1950s, Calvary has a rich legacy of Bible-based teaching. Look around our website, listen to some of our teaching, follow us on social media, or give us a call.  But the best way to get to know us is to come and visit. We worship every Sunday mornings at 10:15am and welcome new visitors weekly.  I hope to see you soon.

Life, Hope, and Joy through Jesus

We desire to be part of a movement in East-Central New Jersey that finds the answers to life’s biggest and hardest questions in Jesus Christ.  Humanity’s biggest problem is its rebellion against the God who is revealed to us in the Bible.  As a result, the world doesn’t work as God designed it to be and we are destined for death, despair, and sorrow.  But God has intervened through the person of Jesus Christ, providing a road that leads to life, hope, and joy.  This road leads through a place called Calvary — the hill where Jesus sacrificed himself so that everyone who puts their faith in him can have their relationship with God restored.  This good news is what Christians call the gospel.  It is the source of our eternal life, the basis of our transformative hope, and the anchor for our unshakeable joy.

Although not written by the apostles, the Apostles’ Creed is a concise summary of the essential teachings of Christianity. It originated as a baptismal confession, probably in the second century, and developed into its present form by the sixth or seventh century.

I believe in God the Father Almighty, Maker of heaven and earth. I believe in Jesus Christ, his only Son, our Lord, who was conceived by the Holy Spirit, and born of the virgin Mary. He suffered under Pontius Pilate, was crucified, died, and was buried; he descended into hell. The third day he rose again from the dead. He ascended into heaven and is seated at the right hand of God the Father Almighty. From there he will come to judge the living and the dead. I believe in the Holy Spirit, the holy catholic church, the communion of saints, the forgiveness of sins, the resurrection of the body, and the life everlasting. Amen.  [Trinity Hymnal, rev. ed.]

The Bible is the foundational standard and the only infallible rule of faith and practice for the church.  Secondarily, Calvary is a part of the Presbyterian Church in America (PCA) and adopts the Westminster Confession of Faith with its Larger and Shorter Catechisms as its confessional documents which summarize and outline “the system of doctrine taught in the Holy Scriptures.”  To read the Westminster Standards, click below.

In a time when accountability matters, Calvary is proudly a part of local and national network of churches known as the Presbyterian Church in America (PCA).  Tracing its history back to the formation of the Presbyterian Church in the United States of America in 1788, the PCA is one of the largest Presbyterian denominations in the country that remains “Faithful to the Scriptures, True to the Reformed Faith, and Obedient to the Great Commission.”  To learn more about the PCA, visit www.pcanet.org by clicking on the link below.

Learn About the PCA

Beginning as a missions work with considerable support from other churches, Bible Presbyterian Church of Point Pleasant Manor held its first service in a tent in August of 1954, with only eight members.  In 1960, the congregation constructed a church building on Washington Drive in Brick Township.  In 1966, the church changed its name to Calvary Presbyterian Church and joined the denomination known as the Reformed Presbyterian Church, Evangelical Synod (RPCES). In 1967, a manse (church-owned housing for the pastor) was completed, and by 1971 the church was financially self-supporting.

In 1982 Calvary joined the Presbyterian Church in America (PCA) and on April 10, 1985 installed Craig DiBenedictis as its pastor.  Dr. DiBenedictis served for more than 30 years, guiding the church through growth that led them to move from its original building in 1996.  For several years, the church rented space for its worship services in near-by Wall Township–first in the Wall Intermediate School and then in the South Wall Fire Hall.

In 1997, Calvary purchased property in Wall Township, and built and occupied its current facility in 2000.  In October 2018, Craig DiBenedictis retired and Tom Harr was installed as the next pastor.  With gratitude for what God has done in the past, we look with confidence to the future.

“In the end, there really aren’t any novel approaches a pastor can provide.  What must ultimately motivate us–individually and as a church–is a lifelong, fear-overcoming, barrier-breaking, excitement-generating, amazement at what God has done for us through Jesus.”

Tom Harr was installed as the new pastor of Calvary Presbyterian Church in October 2018, after serving for more than eight years on the pastoral staff of Faith Presbyterian Church in Wilmington, Delaware.  Prior to that, Tom spent 14 years working in corporate finance, performance analysis and investor relations for Sunoco, Inc., a former Fortune 500 company in Philadelphia.  He has a bachelor’s degree in Finance from the University of Delaware and a master’s degree from Reformed Theological Seminary.  He is married to his wife Stacey, with whom he has five school-age children. 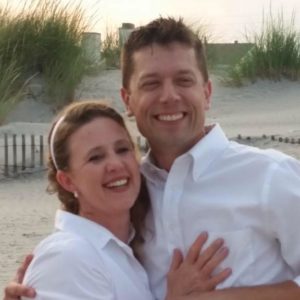 Worship God and proclaim the good news of eternal life, transformative hope, and unshakable joy through Jesus Christ. We desire to be a place where the skeptic, the inquirer and the committed follower of Jesus can feel welcomed and comfortable asking honest questions that receive clear and Biblical answers. We do this by providing opportunities to worship God, continually learning what it means to follow Jesus, building relationships with others, and serving each other and our community.